Few pieces of legislation have been subject to as much confusion, deception, and outright lies as the Patient Protection and Affordable Care Act (PPACA).  I suppose the confusion starts right with the name.  Most people refer to it as “Obamacare” as if the law primarily sets up the government as the provider of medical care or healthcare services.  In fact, it’s primarily concerned with insurance and how it’s purchased.  There are some additional regulations and some incentives to create new, experimental (optional) models of delivering healthcare services particularly for people who have chronic or complex diseases.

Right now I want to focus on some of the economic falsehoods and the economic facts, including what the first few years of experience shows is actually happening.

The Number of Uninsured is Declining Sharply

True. The program, particularly the expansion of Medicaid, the mandated eligibility of children to remain on parents’ plans till age 26, and the healthcare exchanges plus subsidies has sharply reduced the number of uninsured in the U.S. One of the original worries about the system was about employment and full-time employment in particular. The worry was that by mandating that all employers of 50 or more full-time workers must provide group health insurance, it would provide an incentive for employers to cut hours of full-timers to part-time status and thus both reduce workers’ incomes and deny them insurance.

The fears have proven groundless. In fact we have seen the opposite. Full-time employment is trending upward and part-time is trending downward -exactly what we would expect if employers were profit-maximizers during a period of economic recovery and not payroll-cost minimizers.

In fact, closer examination of employment data by industry show a net positive increase in employment due to the act because hospitals and healthcare agencies have more customers and more business.

Medicare Costs Are Improving, Too!

Medicare, the universal health insurance program that covers Americans age 65 and over is also “bending the cost curve”.  In fact, per-beneficiary costs are actually dropping which means that any increases in total Medicare costs are coming from increased numbers of covered individuals, not rising “healthcare costs”. 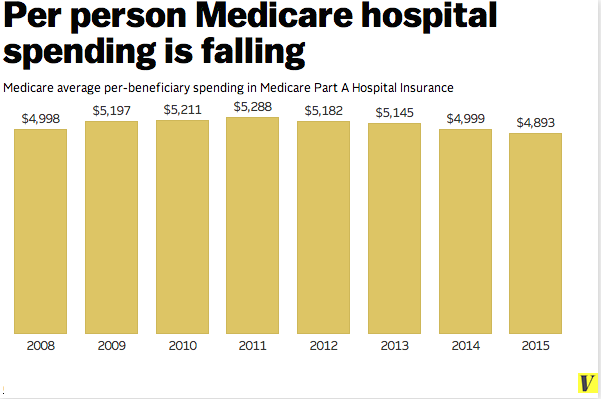 A primary reason why is because of regulations that are forcing hospitals to do a better job of re-admissions.  Re-admissions are situations where someone is treated at the hospital and released, but their treatment was likely inadequate or insufficient. As a result the patient is re-admitted with the same or similar symptoms within 30 days.  Hospitals are being forced to do a better job.

Finally, for a readable list of just what all is in the PPACA “Obamacare” act, see the Political Irony website here.

Iconic One Theme | Powered by Wordpress